Seven Trios have been decided this month starting with Class 2 Trio No. 81 involving William Lindberg, Paul Scott and Philip Tolhurst which ended in a rare three way tie. All players receive 1 BCM point and continue to play in Class 2.

Next we have Class 3 Trio No. 50 which was won by Yosau Sitorous  in a close fought battle with David Coyne. Yosau receives 3 BM Points and is the first player to qualify for a Webserver Trios Championship Semi-Final – very well played sir.

Then we have Class 3 Trio No. 53 which was won by our magasine editor. CCM Russell Sherwood who was up against Raymond Burridge  and Philip Beckett. Russell receives 3 BM points bringing his total to 8 and is the second player to qualify for a Webserver Trios Championship Semi-Final.

After that came Class 1 Trio No.  165 which was one by one of our newest members, Selina Kellett with a perfect score of 4/4 against Keith Dudeney and Jim Fox. Selina is promoted to Class 2 and receives her first 2 BCM points – one to watch for the future.

Followed by Class 2 Trio No. 77 which finished in a 2 way tie between Colin Cheek and returning member, Greg Hughes. As result they shared the BCM Points with 2 each enabling both to achieve the required 20 points for the BCCA Candidate Master Title. Both are now also promoted to Class Three with a chance to play in the Webserver Trios Championship – Well played gentlemen

The next result was Class 2 Trio No. 76 which was won by one of the strongest supporters of the Trios Tournament – Malcolm Winter, Malcolm also achieved the BCCA Candidate Master Title as a result of this win. The other players were Derek Whymark and Guy Whitehouse. Malcolm now returns to Class 3 with a chance to play in the Webserver Trios Championship.

Finally, we have Class 3 Trio No. 47  which was won by SIM Olli Yionen who was up against SIM Keith Kitson and Raymond Burridge. Olli and Keith both have the chance of playing in the Webserver Trios Championship if they win their next Class 3’s and Olli receives his first 3 BCCA Master Points.

Three Trios have been decided this month – one in each Class.

We will start with Class 1 Trio No. 158 which has been won by Raymond Cox and David Elwood jointly. Raymond has now achieved the 20 points needed for the BCCA Candidate Master Title, David is now on 12 points – just 8 more to go.

Next we have Class 2 Trio No. 69 which has been won by new member, Praveen Kumar Rallibandi,  with an impressive 3.5/4 – Praveen now has 8 BCM Points and has been promoted to Class 3

Finally, Class 3 Trio No. 44 has been won by BCM Gary Maguire  in a close fought battle with BCM David Grobler. Gary clinched the win by 1/2 a point and receives 3 BM Points taking his total to 6. Both Gary and David are now playing in Trios Championship Qualifiers and may well meet again in a Semi-Final.

Results I’ve been eagerly awaiting!  Russell Sherwood has dominated both these e-mail events in recent years. Likewise Derek Gallimore has dominated the postal sections of these events over many years. With the closure of the postal section this year, however, Derek entered the e-mail tourneys thus offering new and strong opposition for Russell. So who would take the honours this year? It could not be closer!

Congratulations to the Titans and to the other competitors who played their necessary part in deciding the outcome.
Fred Clough

BCCA/C3/Tr48 has been won by Antony Copsey with a score of 3/4 against Frank McMahon and Raymond Burridge. Antony has been awarded his 3 BCCA Master Points.

BCCA/C1/Tr147 has been won by Michael Farmer with a score of 3/4 against Lea Hudson and Raymond Cox. Michael is promoted to Class 2 and awarded 2 BCCA Candidate Master Points.

BCCA/C1/Tr155 – Gregory Hughes is the winner with an excellent score of 3.5/4 against Jun Xiang Tee and Stuart Honey. Gregory is promoted to Class 2 and receives 2 BCM Points bringing his total to 19, just one more needed for the BCM Title

BCCA/C2/Tr80 – Sylvie Roynet wins with a score of 3/4 against Sandy Smyth and John Dunn. Sylvie is promoted to Class 3 and receives 4 BCM Points

BCCA/C1/Tr156 – has been won by Jun Xiang Tee with a score of 3/4 against Selina Kellett and Murray Grainger. Jun is promoted to Class 2 and receives 2 BCM Points

BCCA/C1/Tr146 – Derek Whymark is the winner with an excellent score of 3.5/4 against Hilary Walsh and Jim Fox. Derek is promoted to Class 2 and receives 2 BCM Points bringing his total to 4

BCCA/C1/Tr161 – Stephen Woodhouse  wins with a score of 3/4 against John Walker and Keith Dudeney. Stephen is promoted to Class 2 and receives 2 BCM Points bringing his total to 14

New Page added to the BCCA Website – check it out HERE

It has been a busy month in the Trio’s Tournament with 5 Trios decided. Unfortunately two Trios were subject to silent withdrawals with is extremely poor etiquette and results in the players concerned being banned from the ICCF server and all BCCA Competitions for up to 2 years.

BCCA/C2/Tr73 – LIM Helen Sherwood has won the trio with a great score of 3.5/4, Helen receives 4 BCM Points taking her total to 23 and receives the coveted BCCA Candidate Master Title. Helen is already playing in Class 3 chasing the BCCA Master Title and a Trio Championship Semi-Final Slot.

BCCA/C2/Tr70 – Alex Tupper is the winner against David Howel. Because there was a silent withdrawal – there is no promotion to Class 3 and Alex receives 2 BCM points instead of 4. Both Alex and David are awarded a free trio as compensation.

BCCA/C1/Tr157 –  Unfortunately there were 2 silent withdrawals in this Trio making Jun Xiang Tee  the winner by default. Jun is awarded 1 BCM point and a free trio as compensation. Both players who withdrew are suspended from all BCCA Competitions at the moment.

BCCA/C2/Tr71 – Johnny Owens is the winner with an excellent score of 3.5/4. Johnny is promoted to Class 3 and receives 4 BCM Points. The other players were Malcolm Winter and Stephen Woodhouse.

BCCA/C2/Tr79 – Ray Kappel wins with a score of 3.5/4, well played. Ray is promoted to Class 3 and receives 4 BCM points. The other players were: Malcolm Winter and John Walker

Another busy month in the Trios with 5 Matches decided. The strong support for the tournament has prompted the creation of the new ‘Trios Championship’ with cash prizes available. Check it out HERE

Class 1 Trio No.121 has been won by Jonathan Tymms with a perfect score of 4/4 against Hilary Walsh and new member Stuart Honey. Jonathan is promoted to Class 2 and receives 2 BCCA Candidate Master Points taking is total up to 4.

Class 1 Trio No.150 has been won by new member, Ray Kappel, with an impressive score of 3.5/4 against David Roberts and John Dunn. Ray is also promoted to Class 2 and receives his first BCCA Candidate Master Points.

Class 1 Trio No.143 has been won by John Walker with an impressive score of 3.5/4 against David Elwood and David Richardson. John is promoted to Class 2 and receives his first BCCA Candidate Master Points

Class 2 Trio No. 67 has also been won by Yosua Sitorus with a score of 3/4 against Pablo Moulan and Sandy Smyth 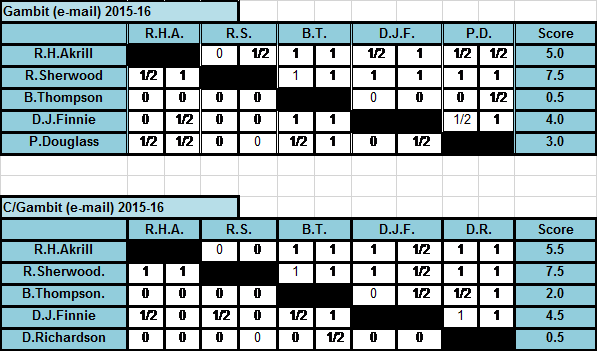 Congratulations to Russell Sherwood on winning both Tournaments with a near perfect 7.5 points. Richard Akrill is the runner up with a very respectable 5.5 points. Gambit Tournaments are unrated and should be played without computer assistance. They are designed to increase the understanding of particular positions. Members who also play OTB may find them of particular benefit.

The ‘Postal’ Gambit Tournament was won by Derek Gallimore with 4 points – well played Derek. This was the last postal event and Gambits will be email only for 2016/17