ICCF Invitational Allain Memorial: BCCA member PETER CATT was the winner of this 13-man international invitation tourney. He won on tie-break from Dave Grobler and Ken Owen. Click this link for the full results table.

BCCA HANDICAP CHAMPION: EDMUND FOULDS! Congratulations to Edmund who had a 100% record (played 10, won 10) in Class 1. Other prize-winners (from 2nd to 6th in order) were NS Rennison, L Rhodes, A Reed, SL Clark, J Clapp. A full points table will appear in the 2011 Yearbook in December.

145 members have already renewed for next season(as at 7/8/2011) with a healthy interest being shown in the BCCA Championship, Candidates & Reserves (57 entries so far) and the new Webserver Trios (32 entries so far). If you haven’t already renewed your Membership, please do so as soon as possible – some pairings have already been issued in the Handicap tournament and several Trio webserver tournaments have started. Don’t delay – renew today!
Other tournament entries so far:- Handicap 31, SOT 10, Endgame 9, Players 9, E-mail 8.

Allan Gardner & Neil Jefferson are the joint winners of the Silver Medal Webserver tournament – they could not be split on points or tie-break. Congratulations to both! The crosstable and all the games can be viewed here:- Silver Medal Results

The BFCC are launching a new British Webserver Team Championship for 4-man teams. This will effectively be a mini-version of the very successful ICCF Champions League. Each player will probably play 6 games (three white, three black) although this is flexible.
Any group of 4 friends can get together to enter a team but the BCCA will make it easy for you and we will put together as many teams as possible from people interested in playing. The normal Entry Fee is £20 per team (£5 per player) but the BCCA will cover half the
cost if the teams enter under the BCCA banner so it will only cost £2.50 per player – a bargain!
I am hoping to swamp this new competition with BCCA teams – as many as possible!
For full details see:- http://www.bfcc-online.org.uk/british-webserver-team-tournament
If you wish to play, please send a cheque for £2.50 (payable to “BCCA”) to Neil Limbert (address inside the front coverof the magazine)
or pay online directly to BCCA’s new PayPal account. Please use the button below and quote your BCCA membership number in the ‘Special Instructions’ field. 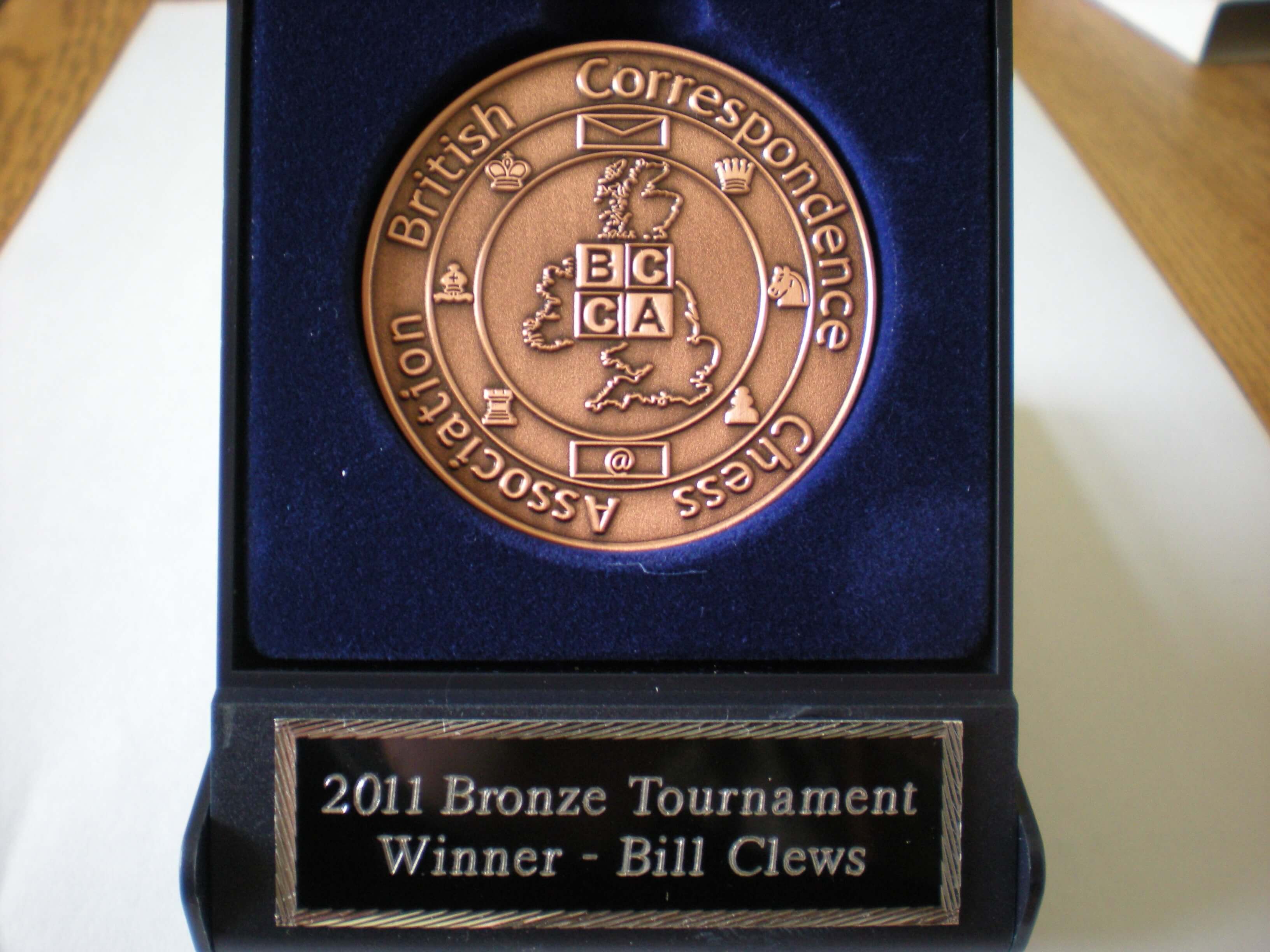 The 2011 Bronze Medal Webserver tournament has been won by Bill Clews with an excellent score of 7.5/8. The crosstable can be seen here http://www.iccf-webchess.com/EventCrossTable.aspx?id=24706 – there are still some ongoing games.

So, I have lots more room! If enough entries are not received, some tournaments may not take place which would be a shame. Please enter! New members welcome! Last date of entry, February 10, 2011. Please contact Neil Limbert if you require further information.

Knock-Out Tourney A has been won by Graham Pattrick- congratulations to Graham.
In Knock-Out tourney B, the final has just begun between David Elwood and Jean-Paul de Baene.The all-play-all final is well underway and Les Ellis has taken a commanding lead on 5/6 but there are still 16 games remaining.