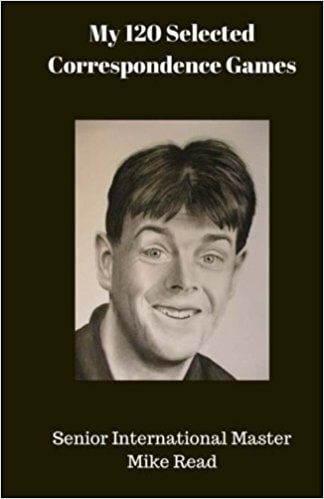 Highly recommended! Chess books specifically concerning correspondence chess are quite rare. Even rarer are game collections by specialist CC players, so this book is a very welcome addition to this list.

Mike Read was born in 1960 & was a strong junior chess player OTB in the 1970’s. It was in the late 70’s and early 80’s that Mike began to specialise in correspondence chess and this game collection covers games from 1978 to 2000, at which time Mike was forced to abandon competitive chess due to health issues.

Mike was a very strong player! He earned the ICCF Senior International Master Title & had an ICCF rating of 2571 at its best. All this without ever owning a computer or using one during his games. So this collection is very special as all the annotations come from Mike’s own brain, and his thoughts at the time.

This is a thick book! Over 500 pages for only a little over £10 is an excellent bargain at a time when most new chess books are £20 or thereabouts. The introduction lasts only four pages & there then follows a one page summary of his results in his competitive CC career. The rest of the book is jam-packed with games & annotations.

The quality and strength of his opponents grew as his career progressed and the book is laid out chronologically, so you will find the strongest opponents in the latter half of the book. Having said that, I really enjoyed playing some his early games where tactics abound! Some of these early opponents are still playing BCCA chess today such as Peter Tibbert, Iain Gould & Peter Coast. His later opponents include GM Tonu Tiits of Estonia, GM Matthias Rufenacht of Switzerland (still active & playing today) and GM (and World Champion) Joop van Oosterom of the Netherlands.

This book is strongly recommended for all players of all strengths, whether correspondence chess players or not. You cannot fail to learn from the quality of Mike’s annotations.