At the BCCA Annual General Meeting on November 1st, Jonathan Rashleigh decided to retire from the office of President after more than 6 years at the helm of BCCA affairs. Indeed, Jonathan has been attending meetings for more than 13 years as an Executive Committee member, Treasurer, and finally as President. His wise counsel and solid good sense will be sorely missed at our biannual meetings.
He is replaced as President by Stan Grayland. Stan first attended a BCCA Annual General Meeting back in the 1960’s (!) when he remembers a hall full of people attending the AGM. Having been a volunteer worker on and off for over 40 years with BCCA, and having already been awarded an Honorary Life Vice-Presidency for his services to our Association, there is no-one better qualified than Stan to be in control of the BCCA at this time. We wish Stan good luck in his new role. 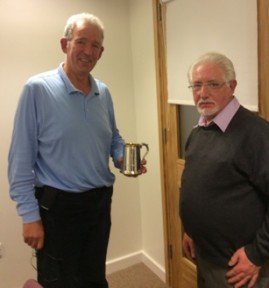 Jonathan Rashleigh was awarded the post of Honorary Life Past President and was also presented with an engraved Tankard as a leaving gift & thank you for his dedication & service to the BCCA.